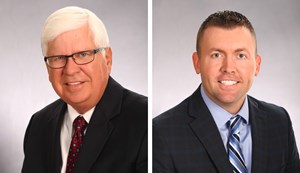 NORFOLK, NE - Midwest has announced that Pat Hughes will be moving into an Emeritus role at the end of 2018 and Jason Love will be assuming the role as Market President in Norfolk.  Hughes will remain engaged in oversight roles in the Norfolk and Wisner markets as well as serving on the Board of Directors and various committees.  Doug Johnson, Midwest Bank President & CEO stated, “Pat has been a vital part of Midwest Bank’s growth over the past 13 years.  Pat led the Norfolk location from its inception in 2006 and his leadership has established a strong presence for Midwest Bank in the Norfolk market.  We are grateful for his service over the years and happy that he has the hard-earned opportunity to enjoy migrating into retirement.”

Jason Love will assume the role of Norfolk Market President beginning in 2019.  Love has been with Midwest Bank for over 12 years, most recently serving as Senior Vice President.  “Jason is a very talented banker and has the professional and personal skill set that Midwest Bank looks for in our leadership positions.  Over his career, he has shown great leadership in many areas and we’re excited for him to lead our Norfolk locations into the future,” stated Johnson.