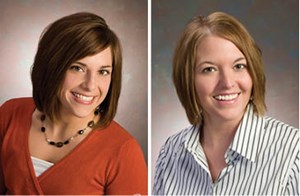 Midwest Bank’s Norfolk location has announced the promotions of Marcy Kratochvil and Amy Schroeter to Vice President. Both Marcy and Amy have been with Midwest Bank since we opened in Norfolk 10 years ago.They have shown great leadership and growth in their careers and I’m confident they will continue to play a major role in Midwest Bank’s success for years to come,” said Pat Hughes, Norfolk Market President.

Marcy started with Midwest Bank over 10 years ago, working in various areas of the retail side of the bank.  Starting as a Customer Service Representative, Marcy’s current role includes Branch Manager of the bank location on 13th & Taylor as well as managing the Marketing department for all Midwest Bank locations across Eastern Nebraska.  “Midwest Bank has opened doors for me in my career that I always dreamed of.  I’m excited to continue my career here and grow professionally,” said Marcy.   A native of Leigh, Marcy is a graduate of Leigh High School and received a degree from Wayne State College in Business Administration with concentrations in Marketing and Advertising.

Amy’s career with Midwest Bank also dates back 10 years.  Through her career, Amy has worked as a Customer Service Representative, Loan Administration and currently is a Mortgage Loan Officer and Assistant in the Human Resources Department.  “It has been so satisfying to be a part of Midwest Bank’s growth, not only in Norfolk, but across Eastern Nebraska for the past 10 years.  In an industry that is always changing and I’m looking forward to my future here,” added Amy.  Amy grew up in Norfolk and is a graduate of Norfolk High School.  She attended Wayne State College and earned a degree in Business Management.