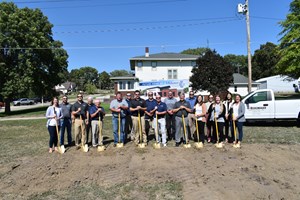 September 1, 2022 (Wisner, Nebraska) - Midwest Bank is pleased to announce plans to build a new facility in Wisner, Nebraska. The new branch will be constructed on Avenue E and 12th St. N. The new building will replace the current location at 920 Avenue E, where the bank has resided since 2014.

“It is a long-standing tradition of Midwest Bank to invest in the communities in which we serve, and we feel that our new building in Wisner reflects our confidence in the community and our commitment to its future”, said Doug Johnson, Midwest Bank President & CEO.

Relocation will allow Midwest Bank to add a drive-thru and ATM in the new location, resulting in improved customer access and work efficiencies for staff. “Having served the Wisner community for the past seven years, we are excited to have a facility that will allow us to serve our customers better and solidify our presence here,” stated Ben Pestel, Wisner Vice-President.