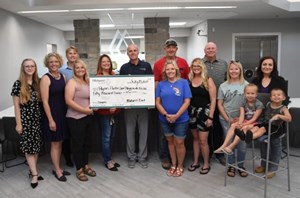 YORK, NE - Midwest Bank is the latest to stand behind the Peyton Parker Lane Playground in a big way. Friday, members of the families along with bank staff and city officials gathered for the $50,000 gift. Shown (from left) are: Laura-Kate Eckhart (MWB), Sue Crawford (city administrator), Jordan Rathke (MWB), Cheree Folts (city rec director), Lisa Hurley (YCDC), Chad Hammer (MWB), Julie Hoffman and Chad Hoffman (parents of Peyton and Parker), April McDaniel and Barry Redfern (MWB), Paige, Harper and Hudson McKenzie (family) and Lenna Rivera (MWB). From the first donation of $120 from Tim and Becky Benson of Thayer on June 8, 2020, the fund has skyrocketed to $558,000 including cash in the bank and confirmed pledges.